​Once upon a time a grey horse named Baco who, depending on the day, was also known as:  Bacochino, Chubby Checkers (or plain Chubby), Escape Artist, Houdini, the Grey Wonder, and that Crazy Andalusian. In a tragic accident, Baco unexpectedly past on to horse heaven in late April 2010.  It was due to the shock of his loss that I was pushed to create The Grey Tail benefiting The Baco Fund.  For years I have wanted to start a fund to help those in the horse community both near and far with emergency expenses—horses are unpredictable and so are the vet bills. 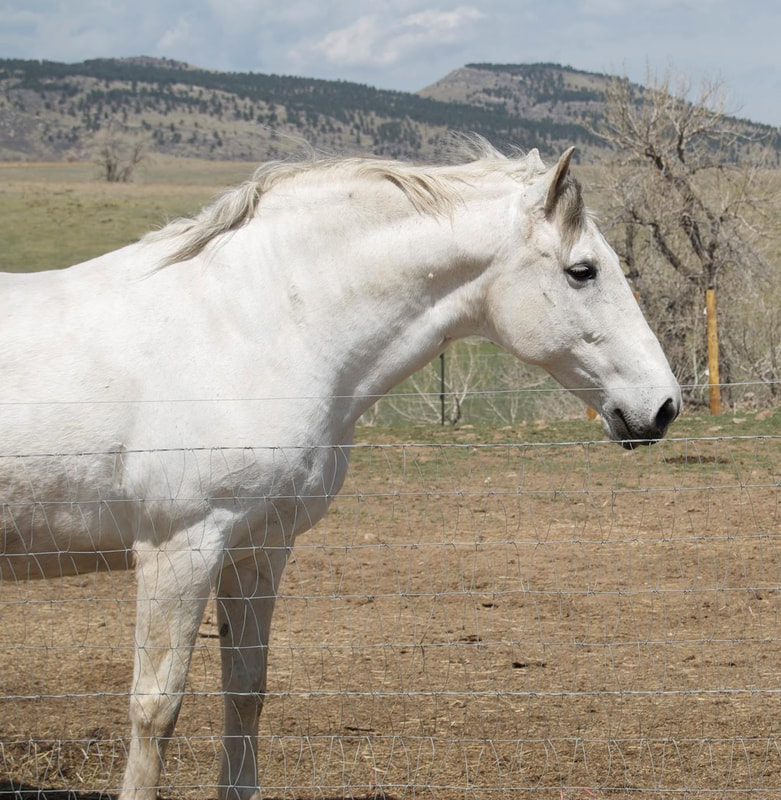 ​Baco came to me as a troubled soul with a sordid and somewhat shady past.  He arrived Colorado via his native country of Nicaragua after a stint in upstate New York.  He was supposed to be a fancy dressage horse, but being a rather opinionated Andalusian, talent or not, he decided this was not what he wanted to do.  Our partnership those first few months was challenging, under saddle Baco avoided all basic riding aids and went backwards or reared up when I put my leg on him.  He was very aggressive towards people and other horses, and we were even asked to leave his first home in Colorado.  Fortunately, my dear friend, Becky Arnold, agreed to let Baco stay at her ranch, “until I could find him another home”.   To Baco, however, he was home, and ended up living the next eight and a half years at her mountain ranch.  It took Baco several years to be comfortable in his surroundings and to trust those around him.   The next two years progress was painfully slow, but eventually Baco and I learned together how to make things work.  He would never be ridden in a ring again, never ever practice dressage, and he would eventually learn to live with the other horses and be able to get turn out with some friends.   Baco liked a schedule -- and his mares.  He was an awesome trail horse and so sure footed.  He loved games, in particular the late night escape trick, which left him free to redecorate the barn aisle with blankets and halters.  If you asked, he would demonstrate how to open the gates.  He was fond of tongue tricks -- rolling his tongue sideways, upside down or just hanging it straight out.  Baco had loved my pregnant belly, so it came as no surprise to me that this now gentle, sweet horse would be the first one my son, then six months old, would sit upon.

Baco was more then just a horse to me and I was heart broken by his accident.  I am hopeful The Grey Tail benefiting The Baco Fund will bring me peace by giving back to my fellow horse friends in need.